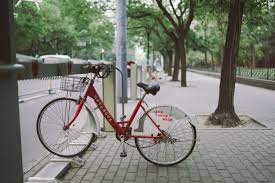 In the town of Ridgewood bikes are allowed on sidewalks. This is allowed since there are no bike paths except near the train station. As the summer approaches, the Downtown of Ridgewood will become more crowded. Along with that more people will be out biking and on the sidewalks. There is no law that doesn’t allow bikes on sidewalks. The State does get very tricky with this however since on their website it says, “While riding a bicycle on a sidewalk is not prohibited by New Jersey statutes,municipalities have passed ordinances prohibiting bicycle traffic on certain sidewalks.

This prohibition is usually posted. It should be noted that sidewalks are for pedestrians. Riding on sidewalks can cause conflicts with pedestrians and, like wrong way riding, can lead to crashes since it places bicyclists in situations where others do not expect them. Except for very young cyclists under parental supervision, sidewalks are not for bicycling.” This rule is very misleading and confusing in the way that there is not a set stance on the issue. This leaves it up to pedestrians to decide what’s right or wrong.

If you go into Downtown Ridgewood you will see many bikers on the sidewalks. I decided to ask some local residents what they thought of the topic. Ridgewood Residents Kim and Fran had this to say, “Yes it is going to be dangerous to ride, if they ride on the sidewalks without helmets and masks. Bikes are not for the sidewalks, they are for streets and parks.”

After mixed response it is clear that Biking on sidewalks in Ridgewood is neither a dangerous or safe activity. It is dangerous for the reason of impeding traffic on sidewalks, and safe because it provides kids, teens, and adults need a safe place away from cars.