The Fight for the Right to Choose 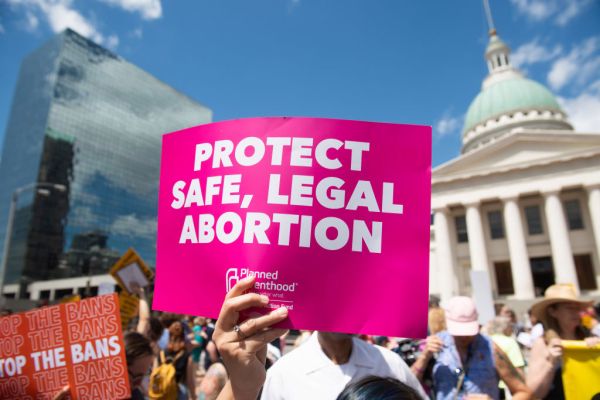 Protesters hold signs as they rally in support of Planned Parenthood and pro-choice and to protest a state decision that would effectively halt abortions by revoking the center's license to perform the procedure, near the Old Courthouse in St. Louis, Missouri, May 30, 2019. (Photo by SAUL LOEB / AFP) (Photo credit should read SAUL LOEB/AFP/Getty Images)

Numerous women in the U.S. as well as around the globe get abortions every year.  Abortions are seen by many as a safe choice to terminate an unwanted pregnancy ethically. However, people are urging the government to ban abortions for women, and there has been a rise of proposals for anti-abortion laws in multiple states. These proposed laws show minimal understanding of the purposes of abortion and would take away a woman’s choice over what is best for her own life and well-being. Abortion should be a fundamental right to all women regardless of the situation, instead of allowing the government to control their choices and decisions about their own bodies.

The most prevalent issue when discussing abortions is the ethics and morals of performing one. Pro-life supporters (people who are against abortion) claim that abortion is unethical on the basis that the unborn fetus inside the mother’s womb is a sentient person, and therefore it would be wrong to “kill” it. This is a problematic claim, as a fetus does not possess the same human dignity as the woman who is carrying it. Unlike a fully developed person, fetuses cannot feel pain for most of the time of pregnancy. Dr. Anne Davis of the Physicians for Reproductive Health states about this matter, “the [nervous] system isn’t developed until the third trimester of pregnancy.” The third trimester of pregnancy starts at 28 weeks, while the entire pregnancy lasts for 40 weeks.

It would be humane to perform an abortion when the nervous system is not yet developed, and even though the fetus can begin to feel pain in the third trimester, abortions during this time period are very rare and are used as a last resort, such as when the fetus would be born with, according to the National Abortion Federation (NAF), “severe abnormalities, such as an undeveloped brain, a severe metabolic disorder, or no working kidney,” or a “debilitating disease, a car accident, a job loss, or a natural disaster.” Furthermore, the NAF states, “Fewer than 2% of abortions are provided at 21 weeks or after, and they are extremely rare after 26 weeks of pregnancy.” Abortions are necessary in many cases for women who cannot handle having a child, and is a humane method of terminating the pregnancy.

Another concern that is commonly debated is the safety of performing an abortion. Even though pro-life supporters believe that abortion is an risky and dangerous operation, this is not true as long as the abortion is performed legally by a professional with proper equipment. According to The American Congress of Obstetricians and Gynecologists (ACOG), “abortion has over a 99 percent safety record,” which makes it “one of the safest medical procedures performed in the United States.” A common myth that surrounds abortion is that it causes development of breast cancer, but these claims were both debunked by the National Cancer Institute, as it was found in a 2009 study that there is “no causal relationship between induced abortion and a subsequent increase in breast cancer risk.” Another myth that was debunked is the claim that abortion causes women to become sterile. A statement by Dr. Jen Gunter from The New York Times affirms that “there is no link between safe abortion and the ability to get pregnant in the future,” and “only abortions that are associated with complications could potentially impact future fertility.” Again, the complication rate for abortion is extremely low, so there are rarely any cases of a woman losing her fertility. Abortion is a completely safe option for women to turn to, and has almost no chance of endangering anyone who choose to get one.

In addition, Abortion has many benefits for women, both financially and mentally. In many cases, women who become pregnant may not be financially stable enough to support a child of their own. In fact, according to Diane Greene Foster of Advancing New Standards in Reproductive Health, “The single most common reason women cite for wanting an abortion is because they cannot afford to raise a child.” The American Public Health Association conducted a study where “women who presented for abortion just before or after the gestational age limit of 30 abortion facilities across the United States between 2008 and 2010 were recruited and followed for 5 years via semiannual telephone interviews.”

Abortions can also keep women’s mental health from deteriorating, as women who are denied an abortion and forced to give birth have a much greater likelihood of experiencing a lower quality of life. The consequences as detailed by the American Psychological Association (APA) are “higher levels of anxiety, lower life satisfaction and lower self-esteem,” “deficits to the subsequent child’s cognitive, emotional and social processes,” and the strong possibility of “interpersonal violence.” If women are banned from receiving abortions, than it will be detrimental to both them and their future child’s overall emotional well-being.

If abortion is no longer legal and accessible for all women, their ability to control their own lives is lost, and there will be many resounding, long-term consequences that will affect them for the rest of their lives. The practice of abortion is humane, ethical, and has almost no chance of consequence to the pregnant woman in safe conditions, as well as benefiting her mentally and financially. Women’s wellbeing must be prioritized, instead of focusing only on the unborn fetus, who’s existence does not override the decision of what a woman does with her reproductive system. Women should not be required to sacrifice their own humanity for something that is not considered a conscious, autonomous person