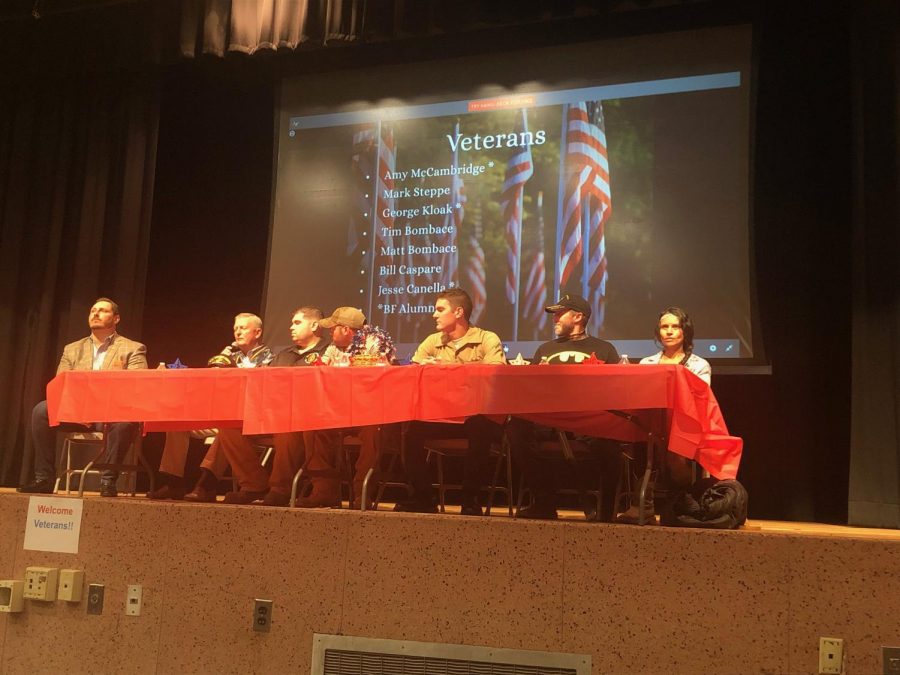 Today, more than ever, it is incredibly important to honor and remember those who have fought, served, continue to serve, or died for our country courageously. On November 11th, BF Middle School hosted numerous veterans to show our gratitude for the sacrifices these brave people made in service to our country.

Prior to the assembly the students were given a paper star and were told to write down either a family member or someone they knew who was in the military, and hang the paper on their lockers. These stars would represent the people they were remembering and honoring for Veterans Day. Another task they were given was to write down one thing that they were willing to “sacrifice” to represent how the veterans gave up so much to help serve and protect our country.

In the beginning of the assembly the school did the Pledge of Allegiance and four 8th grade students sang the Star Spangled Banner. During the assembly there were seven Veterans from various branches which included the Marines, Army, and Army National Guard. These veterans included Amy McCambridge, Jesse Canella, Matt Bombace, Bill Caspare, George Kloak, Mark Steppe, and Tim Bombace. We were lucky enough to be connected to three of the veterans, who were Ben Franklin alumni: Amy McCambridge, George Kloak, and Jesse Canella.

The students were given a chance to ask the vets questions. Some commonly asked questions were,  “What made them join the Military?” “In what country did they serve?” and “What have they learned while serving?” The vets answered the questions as the students listened attentively. The students learned a lot from the stories these brave men and women told.

The next day after the assembly during homerooms, students wrote letters to Navy Seals and people who served in the military to thank them for their service. BF is proud to consider all that the people in the military do for us, not just by talking about them but actually honoring them and having an assembly to learn about what veterans have done to secure our freedom.

This experience was a valuable lesson to all of the students to honor and respect the sacrifices these brave men and women have made for our country. During this time of giving thanks, please take a moment and reflect on all you have to be thankful for and when you get the chance, thank a veteran.