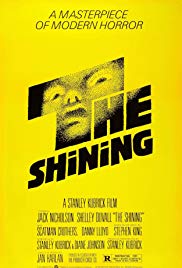 The Shining is a horror movie directed by Stanley Kubrick and is a loose adaptation of Stephen King’s novel The Shining is about a writer that is slowly going insane with his wife and son who has a telekinetic ability called the Shining.  When on vacation the family stays in a place called the Overlook Hotel which has some dark secrets hidden there. When the film was first released, critics and even Stephen King hated the adaptation, but now the film has had a massive influence on other horror movies after it and is regarded as one of the best and scariest horror movies of all time.

The Shining has very well done atmosphere. It focuses more on psychological element rather than focusing on supernatural elements. The movie is scary not due to jump scares like a lot of horror movies today has, it gives you a cold feeling and a sense of dread. The feeling that there’s a danger with the characters. You get that feeling even when the movie starts and the music is playing in the opening. That music tells you something terrible is going to happen to the people in the car going to the Overlook Hotel when the electric organ is playing chilling music. The camera work helps the tension. Whenever a character is moving from one location to the other, the camera follows them as they move making you feel like you are there moving with them. That helps make The Shining more scary than any ordinary horror movie.

One thing a lot of people remember The Shining for are the mysteries and questions everyone has about the movie. These include what the film is symbolizing to what is actually happening in the movie. For example, some people made theories the movie symbolized Stanley Kubrick secretly telling the audience NASA faked the moon landing, how the film is symbolism for how poorly Native Americans were treated, how the movie could be symbolism for the horrors of The Holocaust, how the scene when the kid running away from his dad in the grass maze symbolizes Theseus and the Minotaur, how everything happening is just a dream, and how everything could be in the novel the father is writing. People are still coming up with more theories even today and looking more and more into The Shining. This is how the film could make you more interested in what is happening.

In conclusion, all of these combined elements make The Shining a near perfect and very influential movie. The film can be slow, but it uses this to it’s advantage by making you think about what is going to happen. It has great acting and everything a horror fan would love plus other things to keep their interest that no ordinary horror movie would have. This movie is thought provoking, mysterious, suspenseful, subtle, and terrifying. Stanley Kubrick’s adaptation of The Shining earned its place as a horror classic.